Mrs M and Mr M had the incredibly chance to go skiing across the pond!

Mr M was in US for business therefore his lovely wife (!) decided not to leave him alone for too long and on Thursday she took a flight and went all the way down to Denver, meeting him in beautiful Aspen, Colorado.It’s fair to say that Mrs and Mr M are obsessed by Americans. They love them almost insanely, and in Aspen they had one reason to love them even more.

Beside the perfectly groomed slopes next to the quite wild bowls, the driest snow on earth (apparently the have something like 300 days of sun a year, meaning no ice whatsoever up in the mountain!), and the undone-yet-perfectly-done atmosphere of the little village…what totally impressed Mrs M this time was QUEEN B:The local ‘cool’ hairdresser, run by Rita Bellino. Third generation Italian. Not only she is a very nice and happy person, but she has also the coolest doggy and the nicest story about it!!

The little dog, Rocky Bellino, named after her dad! How can you possible call a dog with your dad’s name?! He passed away years ago – she explained – and because she was very close to him, working on his side for many years, not to feel alone anymore she decided to have a dog named after him! It might sound a bit sad and a bit crazy but the way she said the story made it sound very funny and very American! I loved it!

Anyhow, to cheer my mad love for the United States of America and the American attitude, I baked some nice milky burger buns. It is for sure something you can buy at your local grocery store but these are muuuch better, I have to say!

If you get here and you want to bake your own bread, I am sure you have a food processor!

So you can just put everything there to prepare the dough.

Start from the dry ingredients: in the mixing bowl sieve the two flours together, take a cup of mixed flour out of this mix and save it on the side.

Add the sugar, the salt and the yeast into the mixing bowl, and mix it at low speed, for just a little bit, to mix everything together properly. Something like 15 seconds.

Your stand mixer fitted with a dough hook.

Then break one egg on the side. (Keep the other egg for the end, to egg-wash the buns before baking).

Add the liquid ingredients to the egg (it is better if the milk is not too cold) and add all these to the flour mix, little by little.

At the end add the soft butter, cut previously in cubes.

Now add the flour that you previously put on the side, by inclusions.

Let the mixer go, at low speed, for about 4/5 minutes.

In the meanwhile turn your oven on at 50°.

Once ready, cut your dough in miniature burger buns.

On a lightly floured surface,  roll each piece of dough into a tight small ball, and then flatten each ball slightly with a palm of your hand, previously floured a little bit.

I put baking paper on the oven tray and lay them on the tray.

Prepare the egg wash with 1 egg and 1 tbsp. of milk or water, whisked together.

With the help of a brush, egg wash your buns and add sesame seeds on top of them, if you like them. I don’t.

Now put the tray into the oven for at least one hour, to allow time to rise properly.

Once nice and risen, increase the oven temperature to 170°.

Bake the buns until the tops are golden and undersides are golden-brown and sound hollow when tapped, 23/25 minutes.

The buns are the best the day they are made, but they can be frozen in sealable bags up to 2 weeks.

Just freeze them fresh, as soon as they are cool. 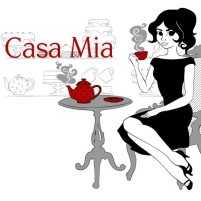 The Art and Craft of Blogging

The latest news on WordPress.com and the WordPress community.

with a sprinkle of fancy

Lessons in Life and Kitchen Confidence